I had the honour of working on this groundbreaking Canadian project as cannabis was set to be made legal in 2018. My contributions included research & strategy and story creation for the project proposal (before Accurate Creative was chosen for the project), storyboarding & scriptwriting for the rough drafts, character design & illustration for the final look, and some animation for the final videos.
The videos were to be used on CBSA's social media accounts to inform Canadians and those travelling to/from Canada that you can't bring cannabis into, or out of the country–it can't cross our borders. They wanted some key wording included between the three main themed videos (3 themes: general don't bring across the borders, don't ship it, declare it at the border) but we had flexibility with creating a script that worked with the story and visuals we designed.
Video released before the date Cannabis was made legal in Canada
Rationale Provided for Proposed Illustration Concept A: "This more mature-looking and distinguished style used geometry, sharp angles, and curves to create an approachable, yet not juvenile, look. Since the subject matter is for adults and is a more serious topic, a more subdued colour palette was used. Natural colour tones bring the Canadian factor to the style and diversity of characters are shown by including a little detail in the background, which will also visually help the functionality of the videos’ zooming out idea. Overall the look is informative and approachable, yet firm to relay the seriousness of the information."

Below: The 1st draft character roughs below were created to show the diverse cast for in-house use only—to be able to refer to the characters quickly, and have an understanding of their personalities for animation, etc. The names were chosen to reference popular TV shows at the time with descriptions tying them to the theme of the specific video they would be in. The names were not needed/used by the client or referred to in the published videos, so did not go through AC's rigorous quality control, but the team found them helpful to use internally while working on the project. 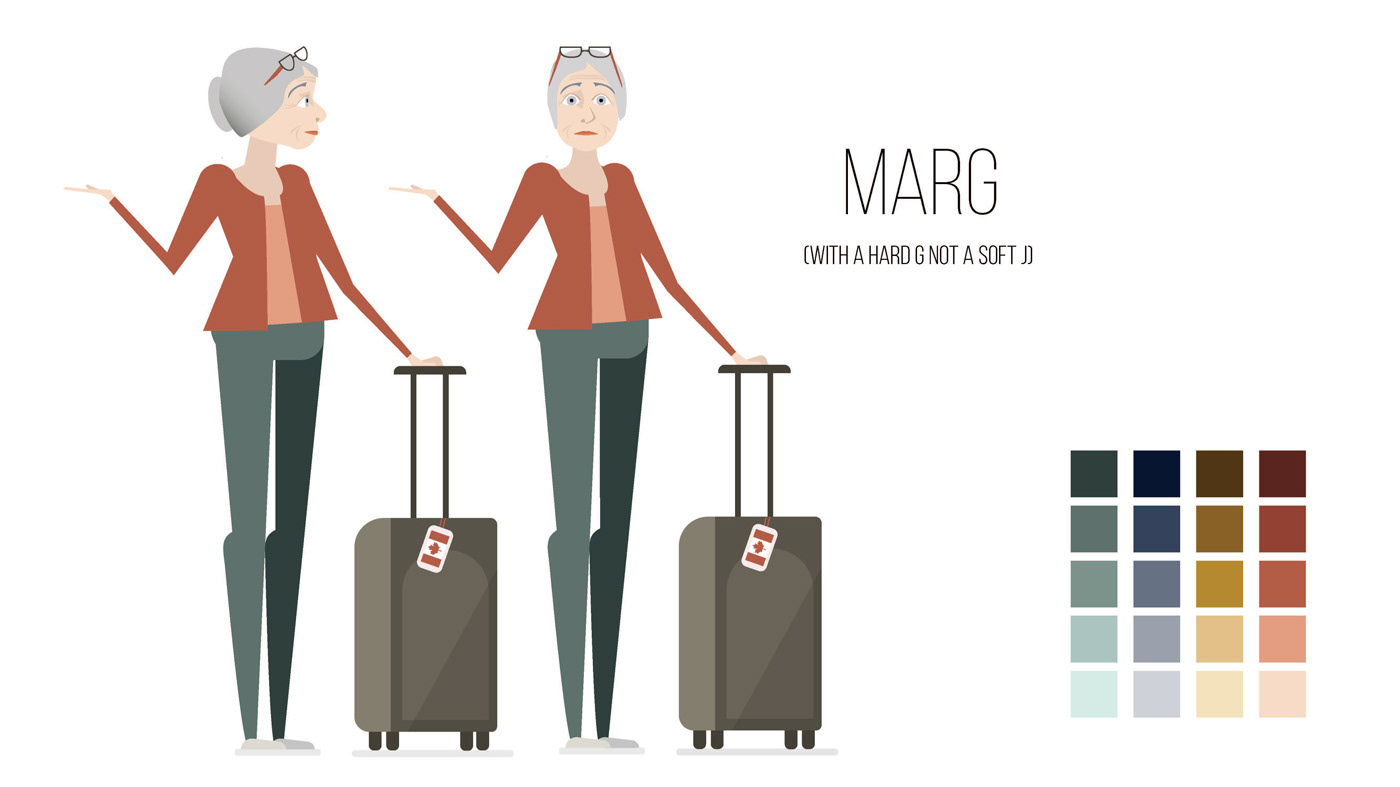 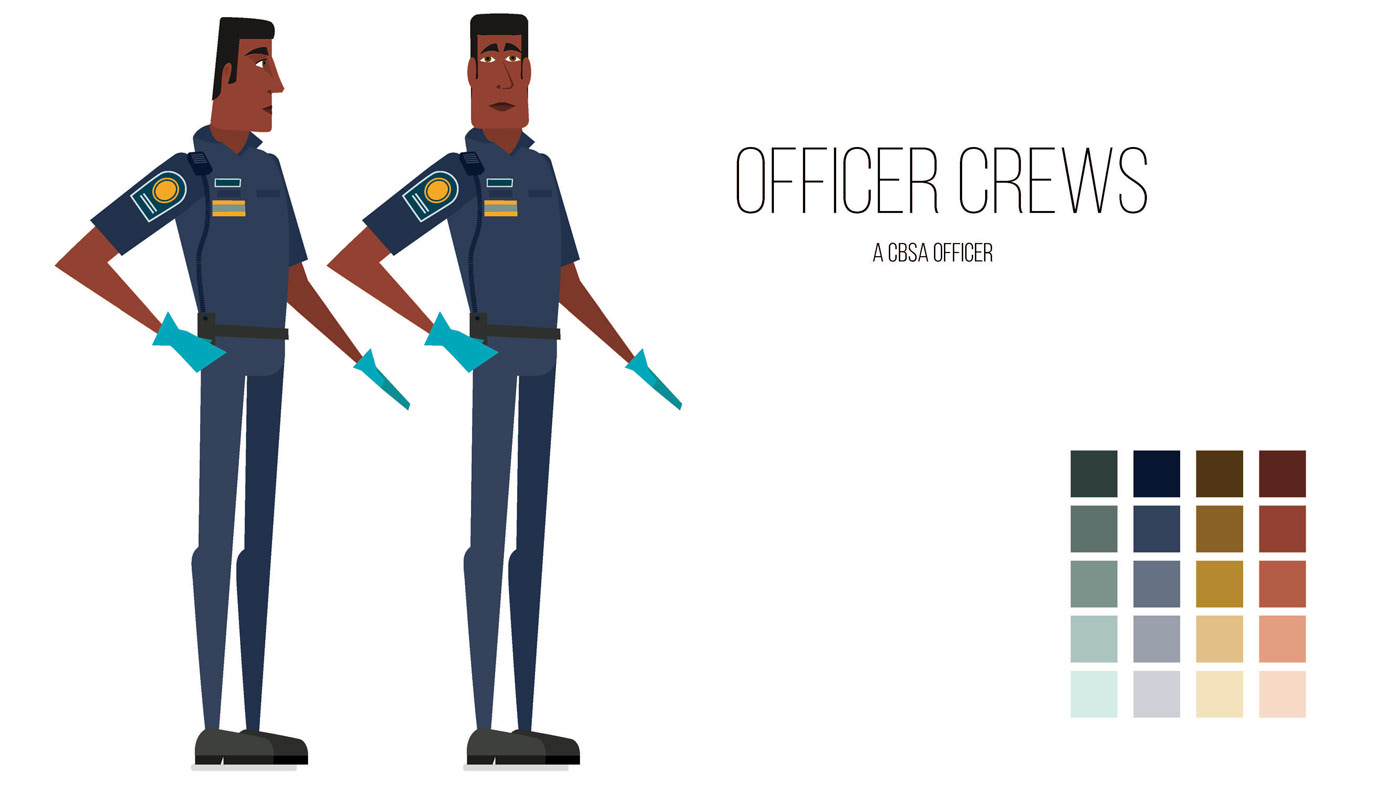 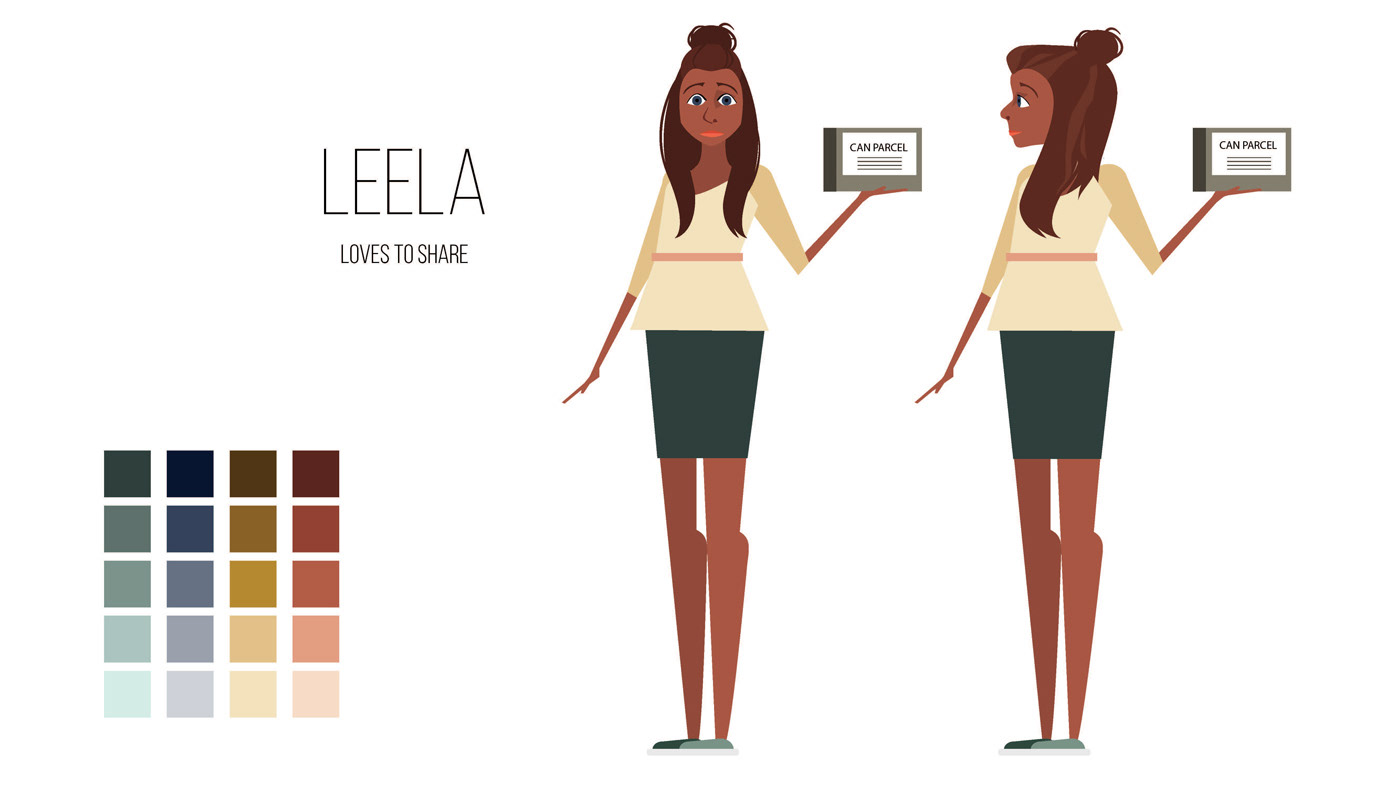 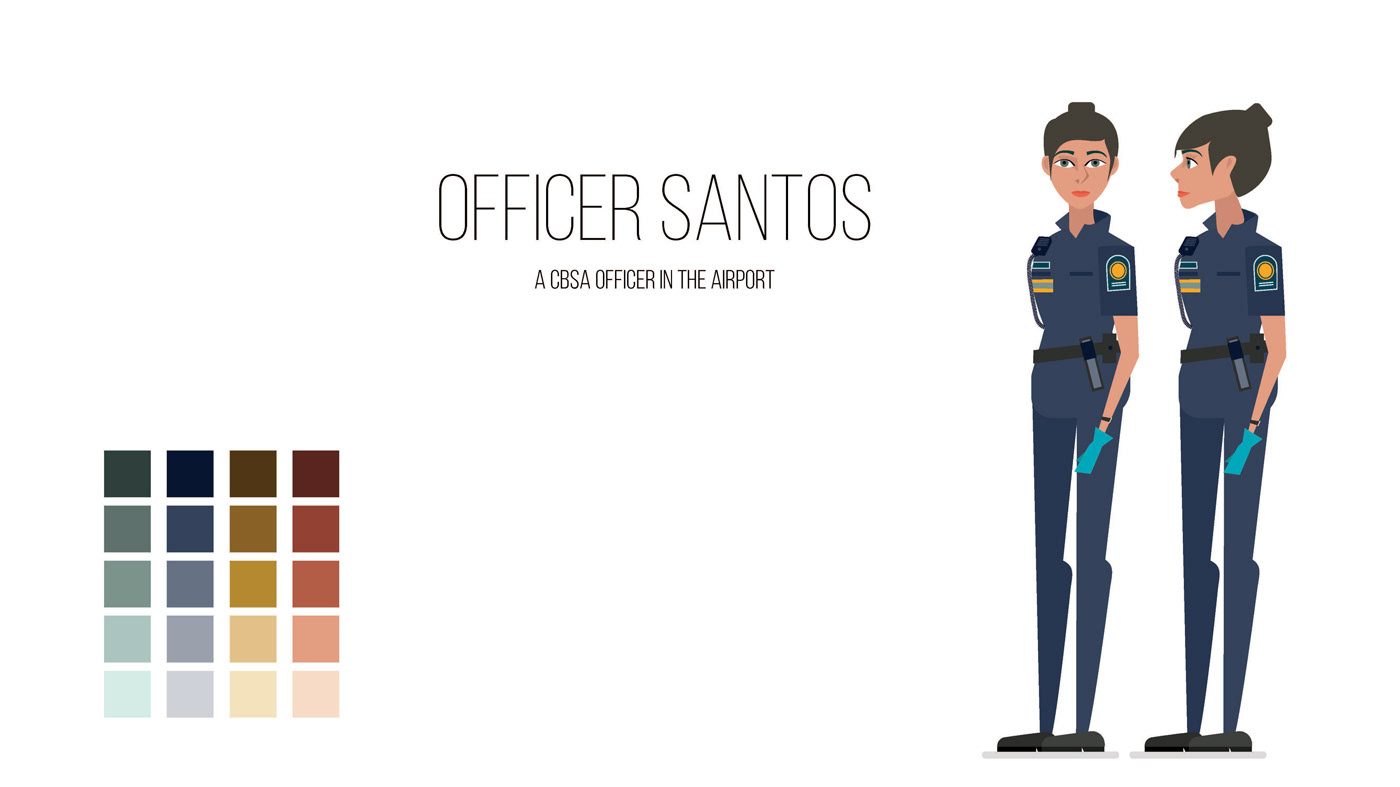 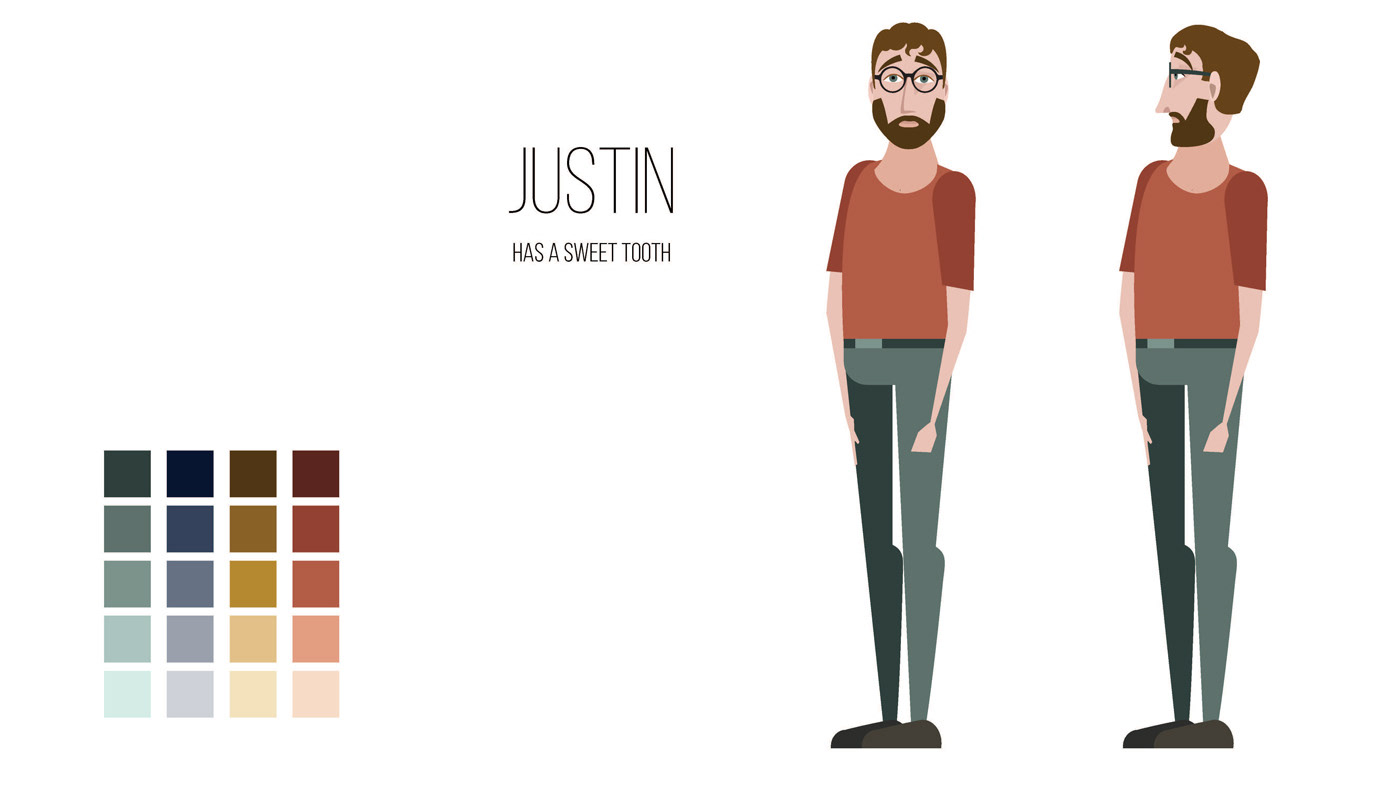 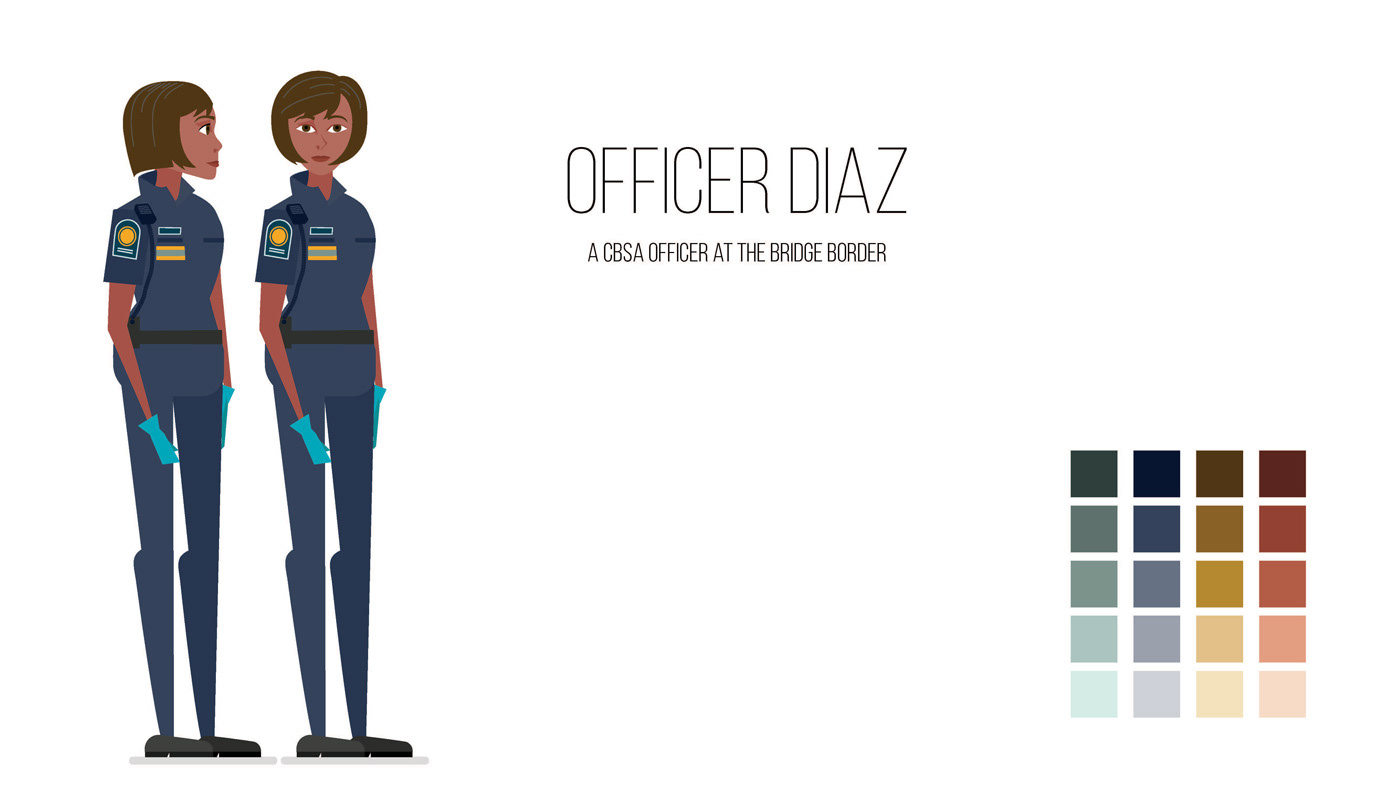 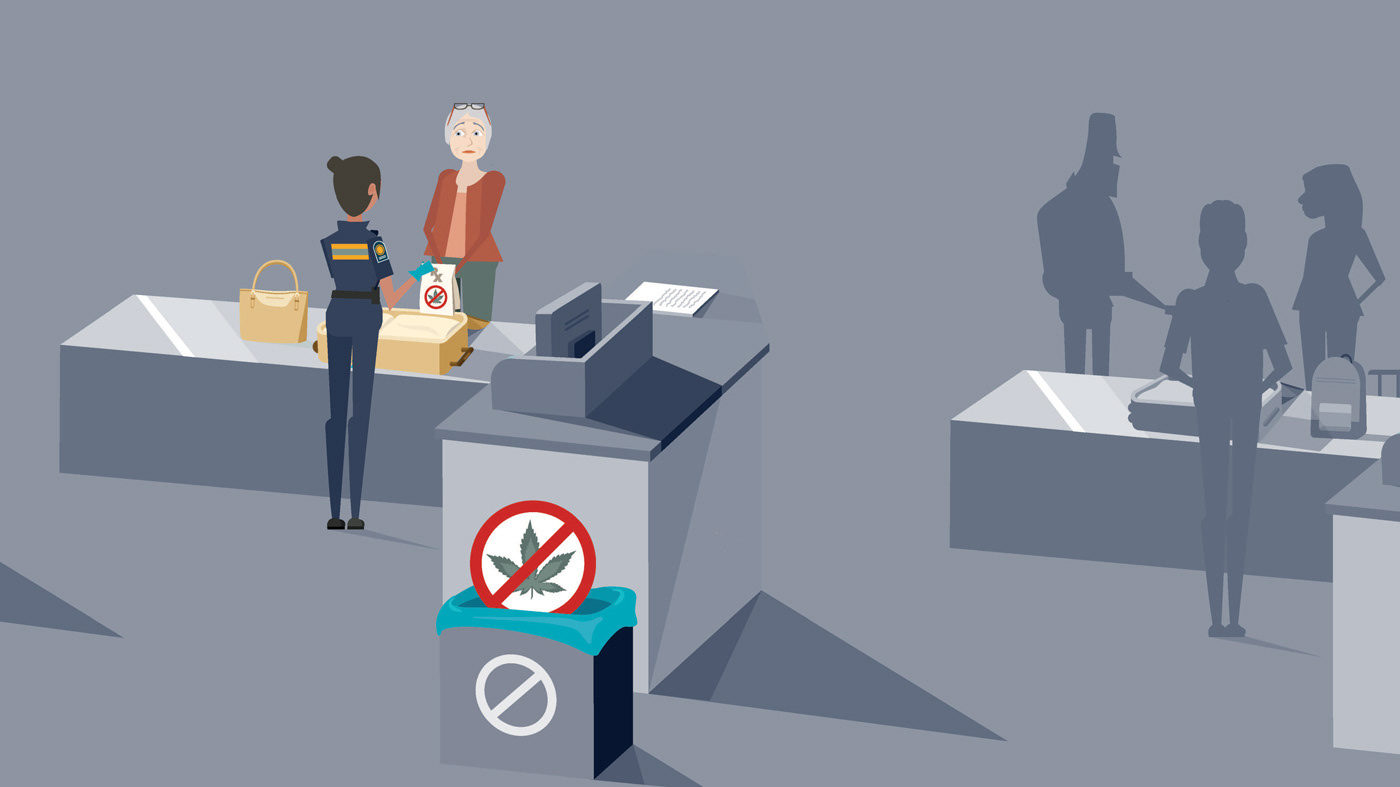 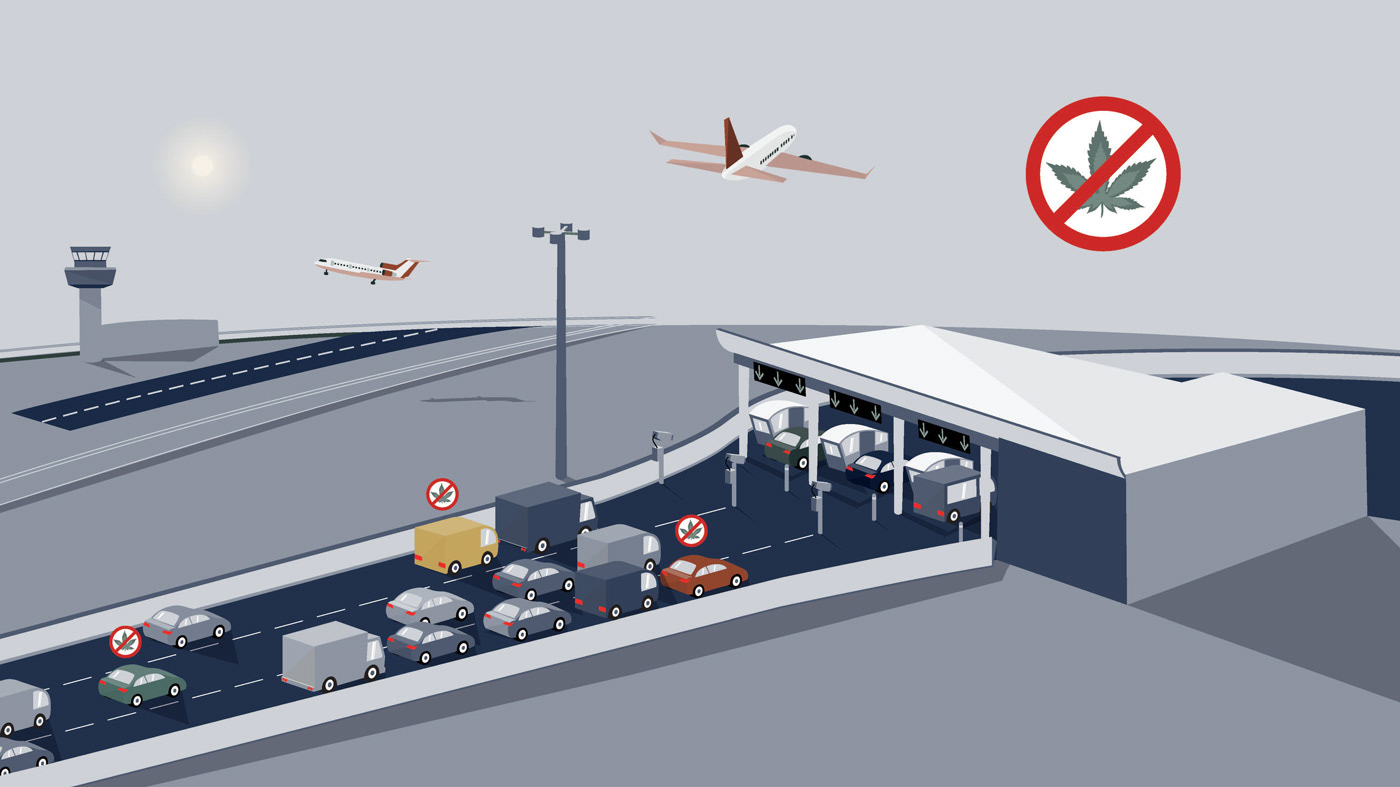 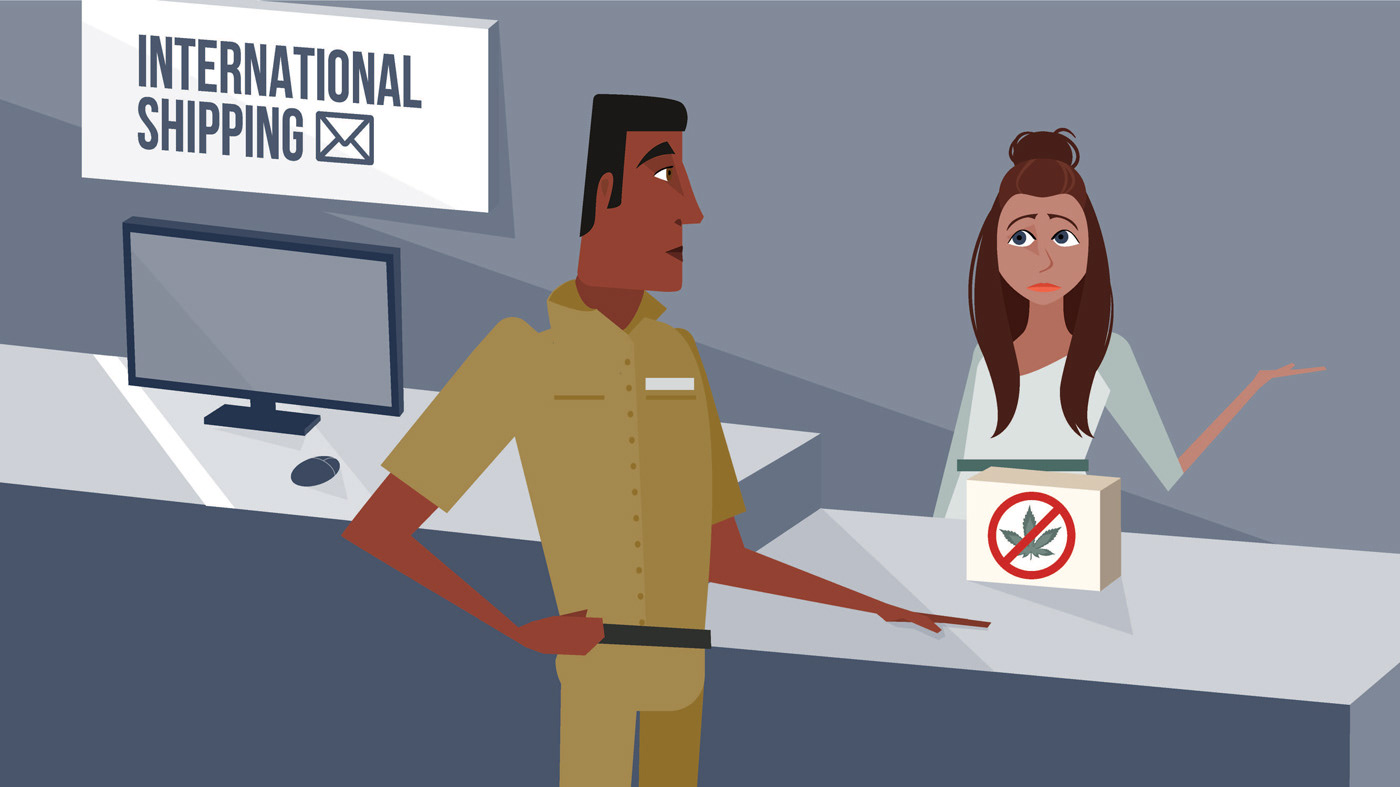 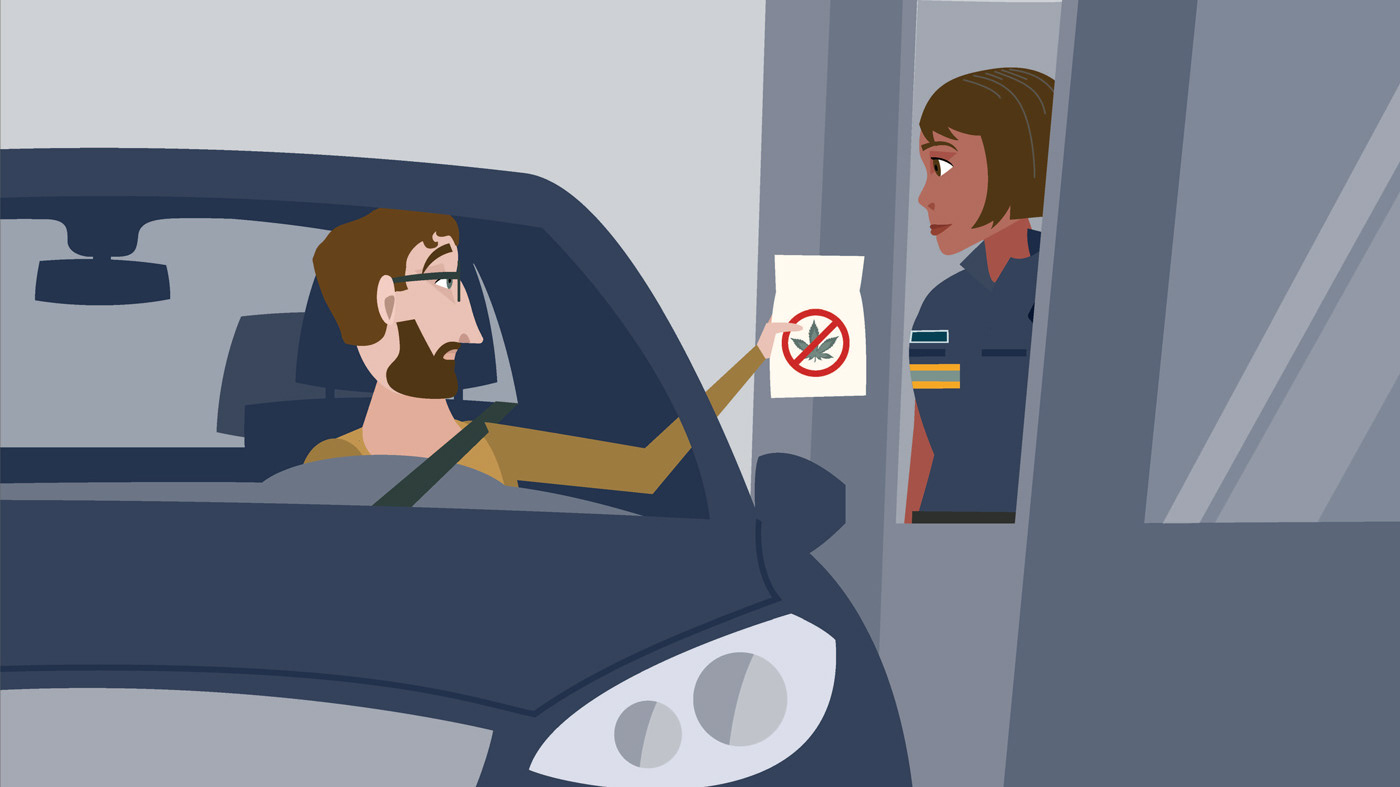 Above: 1st proofs for identifying screens from the storyboards, created in the final style.
Below: Marg in particular went through a few revisions to fit the CBSA's vision for her. 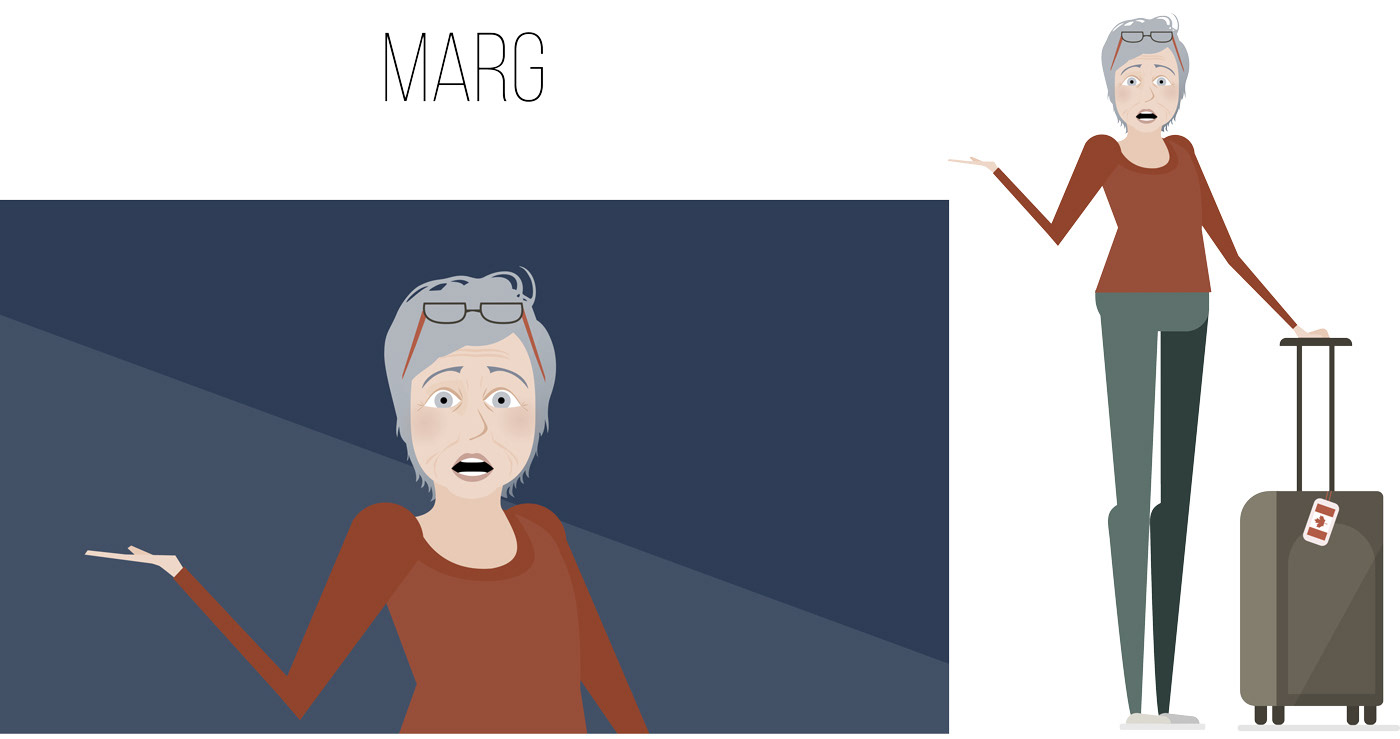 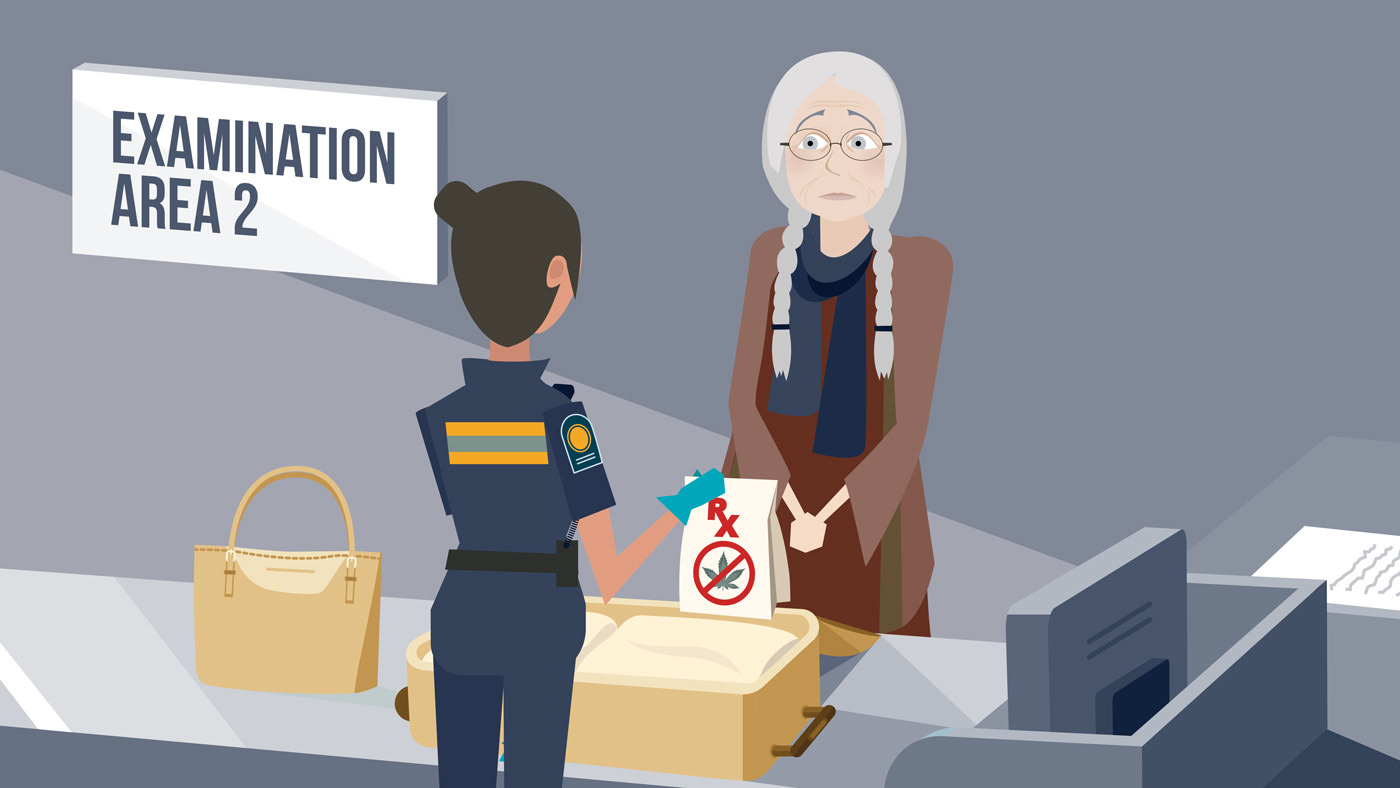 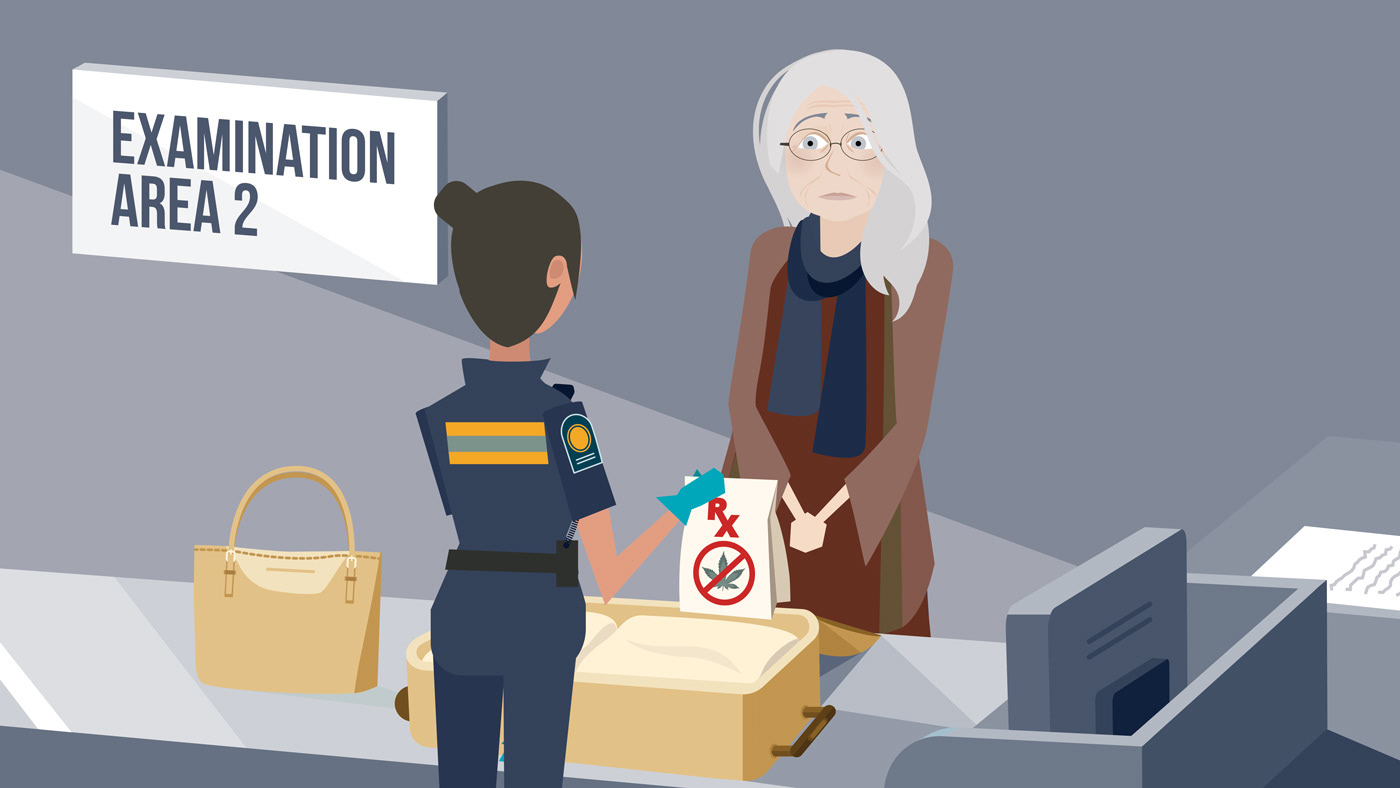 Notes on the project:
I began with research on what past places had done to inform their communities and travellers about the cannabis law changes, especially the extensive research Alaska had published online. They had not only great videos to reference, but pre-existing research that we used to lead a lot of the decisions that were made in these videos. Decisions included making sure subtitles were always on (majority of videos played on social media don't have sound turned on), that colours used were more subdued so as not to appear "childish" or have the content taken lightly, and to use some light humour to draw the viewers in for the real message at the end. I compiled a package of this research and more for the proposal writer, and was credited there for my work.
I created the rough layout of the storyboards from the final script to hand off to the character illustrator, and created the rough first version of the script. I was part of the 2-person team that came up with the tagline "Don't bring it in. Don't take it out."
After the project was awarded to Accurate, I created the example illustration from one of the 3 style options, and it was chosen to use as style reference for the videos. I then created and illustrated the three main characters with feedback & input from the team, and subsequent characters and figures appearing in the videos. I assisted the illustration team and animation team as needed as well.

Vegan Infographic
↑Back to Top